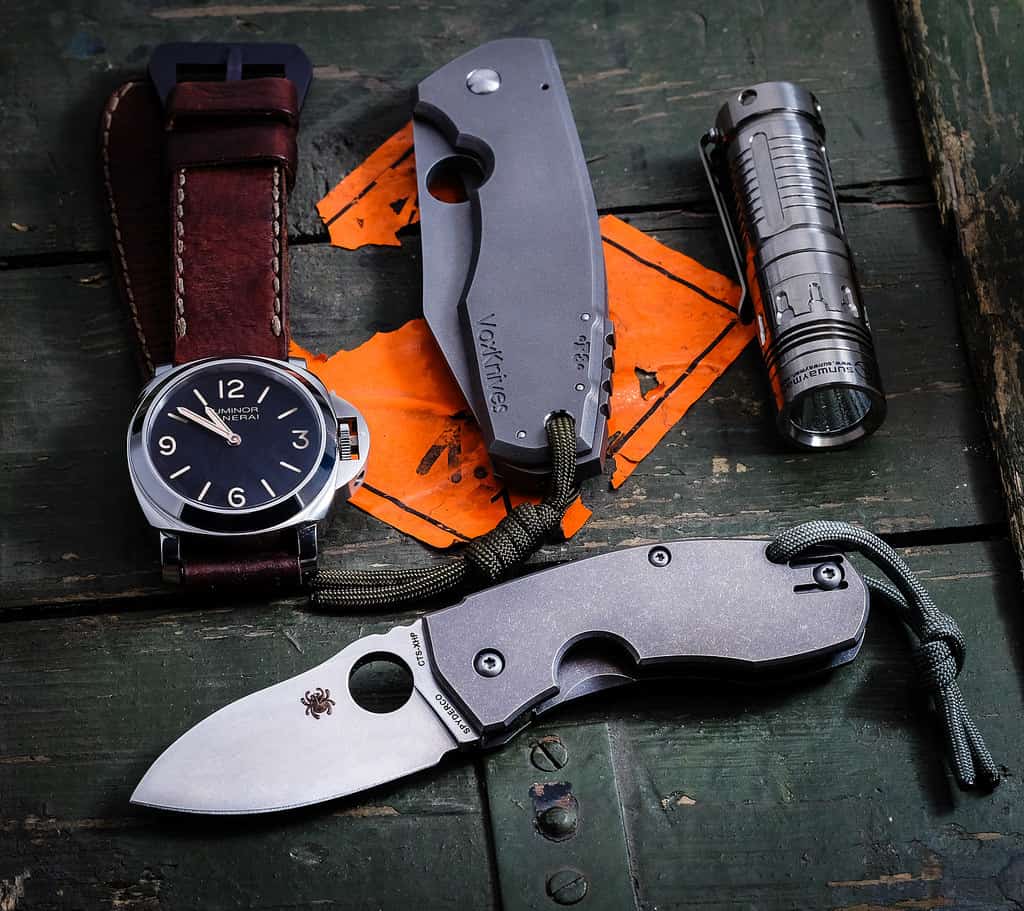 I’ve had a chance to play with a full custom version of this knife (before production release) and my first thought was, “Man, Spyderco should make it a production knife immediately”. Guess what? Yeah, they did! 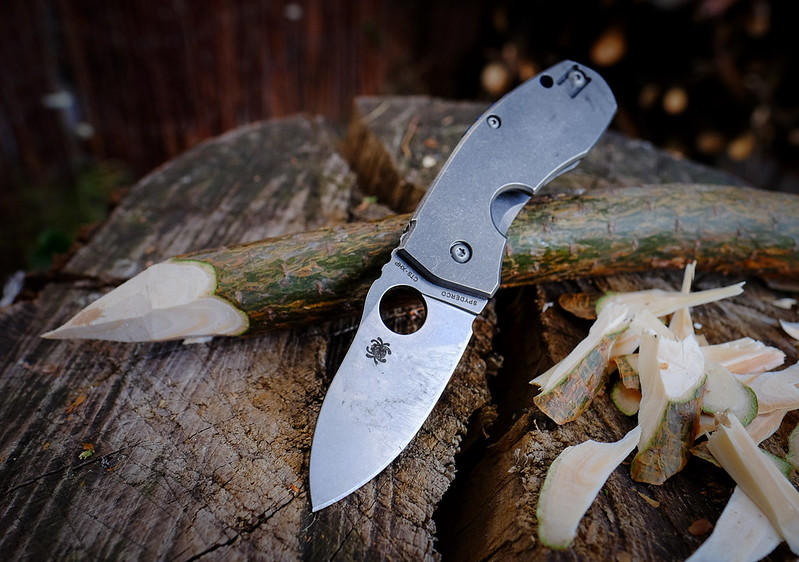 The Techno is a perfect example of “big little knife”. It’s much stronger and can do much bigger work than the size suggests. Actually when inspecting a Spyderco Techno next to the full custom version by Marcin Slysz you hardly notice any differences. Maybe the grind lines are more refined on custom model, and also the pocket clip is different (full clip vs wire clip), but all in all Spyderco nailed it! 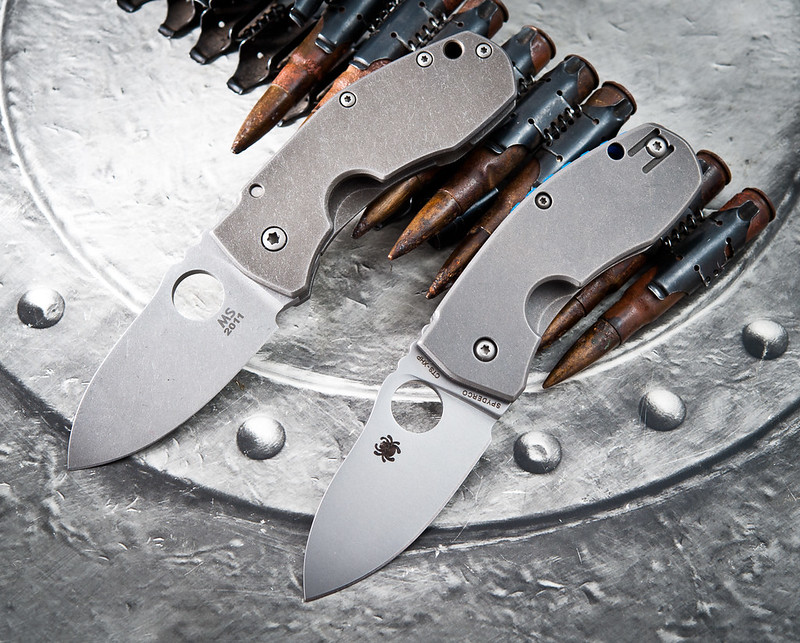 The Techno’s 2.55 inch blade (65mm) has been ground from almost .177 stock (4.5mm), which makes it one tough knife. Thanks to the full-height grind, the knife cuts surprisingly well. I’ve used it for almost any EDC task, both in urban and outdoor environments. It was also my backup knife last summer when sailing through the Great Lakes area, North of Poland. I did a lot of rope cutting with it, both polypropylene and old-school sizal rope (coconut fibre), which really kills most mid-range stainless steels on a long run.

But… the Carpenter’s CTS-XHP was hardly affected. It makes an awesomely long lasting and aggressive cutting edge, which is crucial for rope cutting. What’s interesting is that there was a short run in CPM-S30V steel produced (probably due to Carpenter’s steel shortage), which instantly became a collector’s item (marked S30V on the blade, of course). I’ve actually had 2 Techno’s, but both in CTS-XHP, so I can’t comment on Spyderco’s S30V performance. 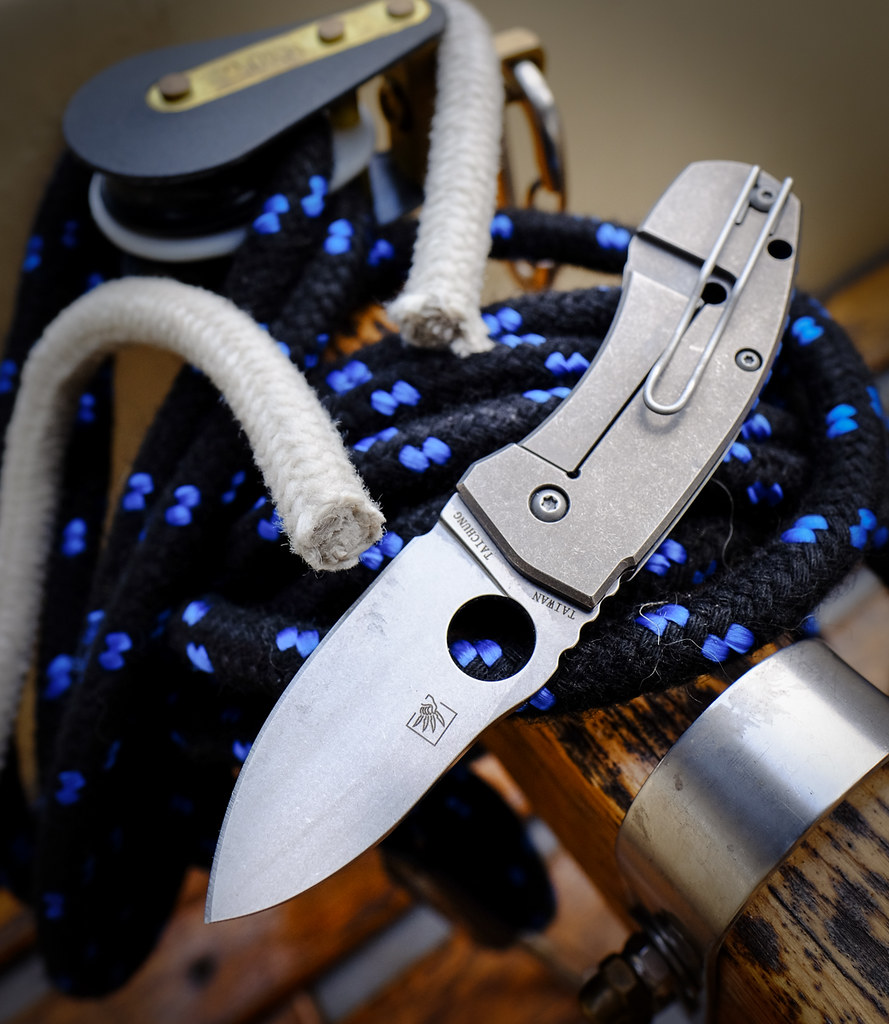 The titanium handle is thick, hefty, slightly curved, with beveled edges – a really substantial piece of cold metal! It was simply amazing how much power it was able to transfer from my hand to the blade when whittling or push-cutting through rope. As I said, it’s a big little knife. Like a bulldog: quite short from tip of it’s nose to end of tail, but with a POWERFUL bite! The handle is also beefy enough to be used in working gloves. 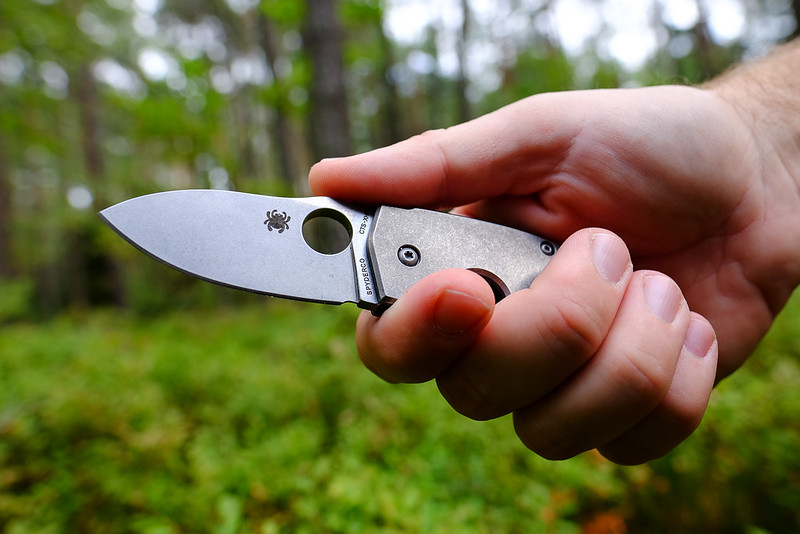 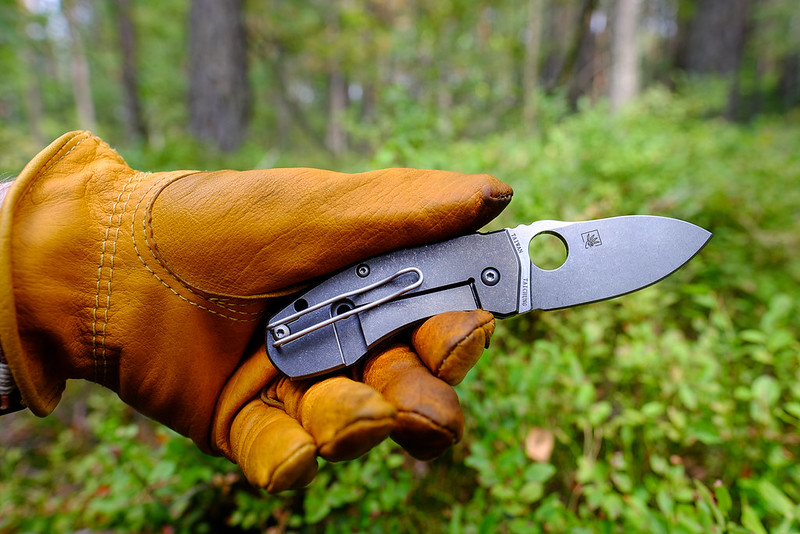 The blade locks securely via RIL lock, which stands for Reeve Integral Lock. I’ve always been a Chris Reeve Sebenza believer, a knife which introduced frame lock to the world of knives, so for me it’s the #1 of all locks. Sure, it’s personal thing if you like it or not, but it just works. The all-screw construction is really easy to disassembly for cleaning or pimping. The blade runs on a bronze washers, just like in the custom one. The Techno is really a smooooooth operator! 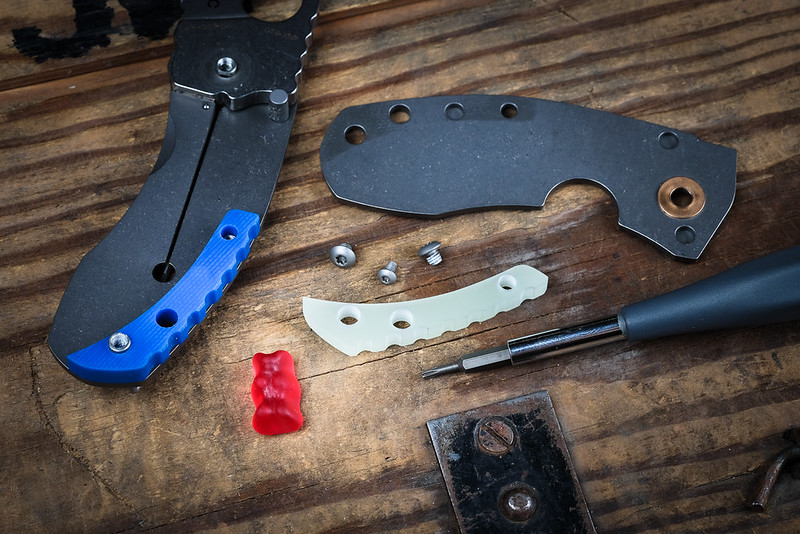 Easy to clean, easy to pimp.

The blue G10 backspacer has thick jimpings on it, which is a grip enhancing feature of course. It’s secured with torx screws and easy to change – no wonder there are many aftermarket spacers and studs available. I customized my Techno with a glow-in-the-dark G10 spacer from Cuscadi Scales, and I love the look of it now!

The wire clip can be placed for right or left hand carry. It positions the Techno quite deep in the pocket, so combined with the wire clip’s stealthy nature it’s not an obviously spottable folder. And last but not least – there is a lanyard hole, easily big enough for 550 paracord – it was a key feature for me this Summer, to secure the Techno for on-board use. I also put a small lanyard on it for EDC carry, which helps me to draw it from my pocket, especially when I’m seated. 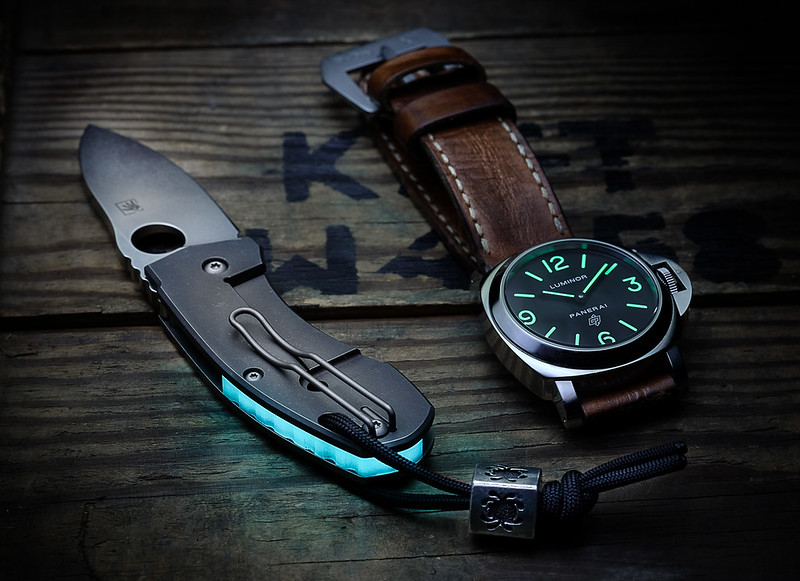 During the last two years I’ve cut and whittled with it a lot! I’ve sharpened a countless number of sticks, cut canvas, leather, all kinds of strings, webbing tapes and ropes. I even used it as an improvised office kitchen knife, but of course it’s too short for any regular food processing. Peeling fruits, opening boxed milk or coffee beans bag, halving sandwiches etc. is what I used it for in the kitchen. What else? Sure it shines as a box cutter – a short stout blade and aggressive edge are key elements for such an application. The Techno is also my handy tool when I work with paracord (when bushcrafting or just for making lanyards) and thanks to the steel’s aggressive nature it works great on all kind of cords and ropes, here it is shredding 7mm polypropylene line. 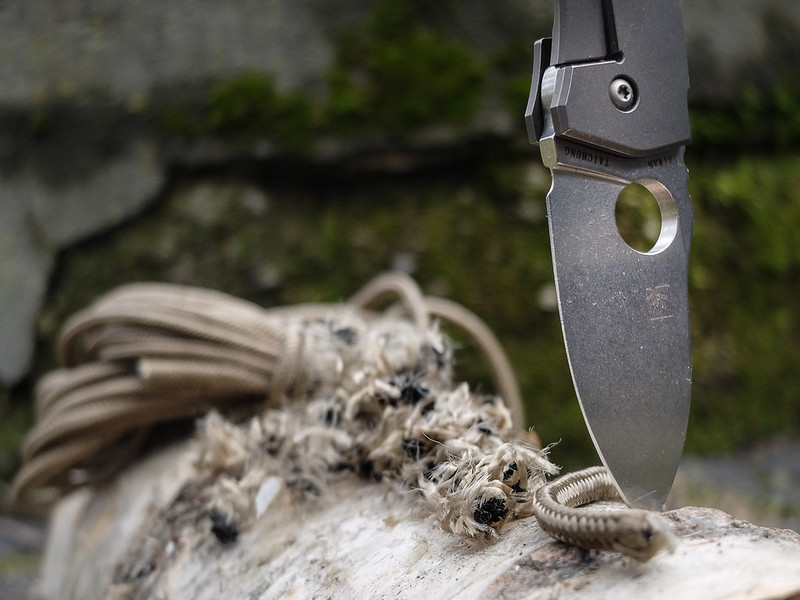 I’ve also used it in frosty winter and the CTS-XHP steel delivers performance in sub-zero conditions. The lowest temperature I worked at with my Techno was -14°C, of course in gloves. Even in these kind of weather conditions I was able to open it easily with a gloved hands, and also close it again (thanks to generous cut-out in Ti frame, originally for opening hole access). This is actually quite unique – most of the folders I have can be opened with gloves on, but closing is usually impossible. The Techno is one or the very few folders which can be operated without any issue. 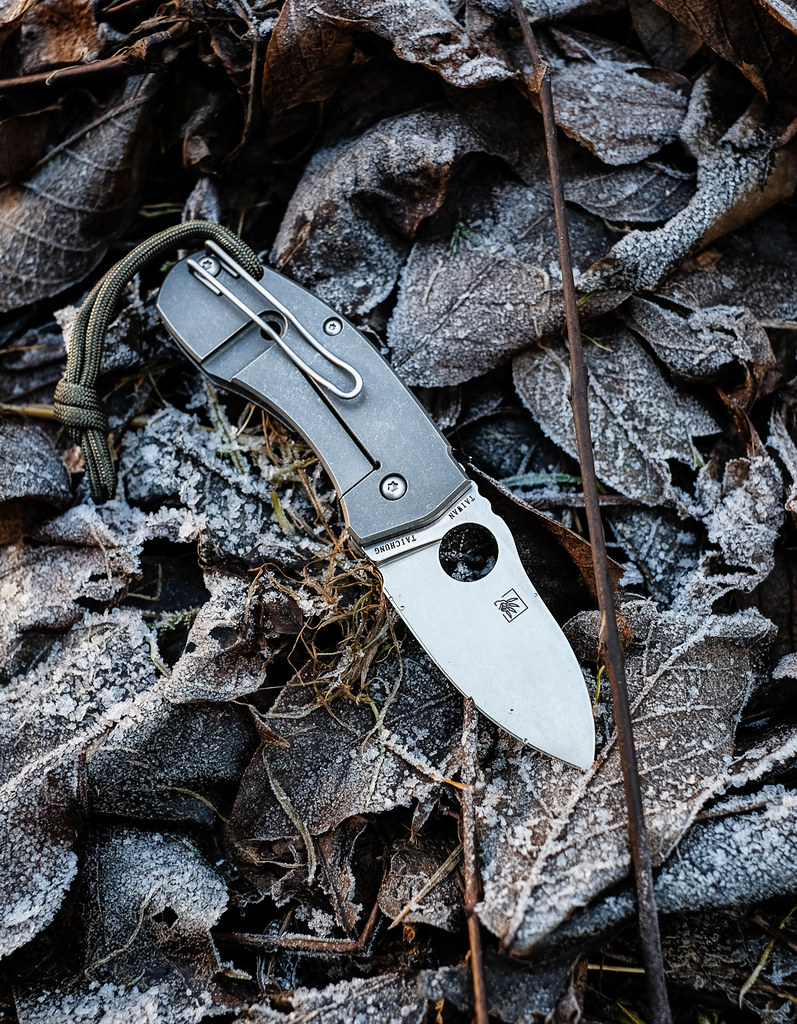 All in all the Spyderco Techno checks all the boxes of a perfect tool-like EDC folder. Tough as nails, but still small enough to be carried everywhere, everytime (where legal, of course). It’s not a tactical looking knife, and thanks to bright blue backspacer it won’t scare anyone… it’s simply a cute, stout folder. It’s hard not to like it, even for non-knife people. And with a blade just a hair over 2.5 inch, it’s legal in most places around the globe (but again, be sure to check local law before carring it as EDC as it has a locking blade). The overall performance of the Techno is considerably bigger than the size suggests. 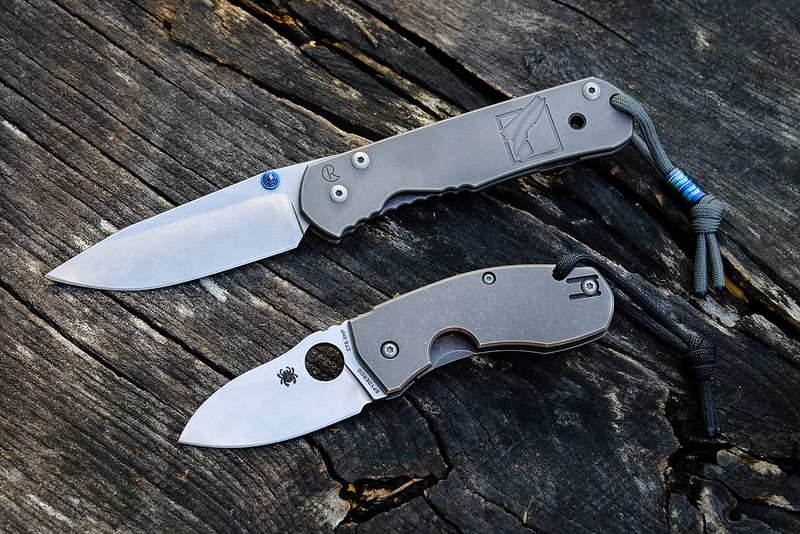 Techno next to a Sebenza, my reference working folder.

Any downsides? Sure, there is no perfect folder. First of all – there is a technical possibility to move the clip to the other side for southpaw carry, albeit the opening with left hand is not as easy as with right hand. It’s possible, just not easy (forget about gloves). Second – at 100 grams (3.6 oz) it’s not the lightest folder for it’s size. It doesn’t matter for jeans carry, but if you think it’d be cool folder for shirt pocket… well, not really. And last but not least… MSRP or $319.95 is not easy to swallow! However it can be found as a street price below $200 and for this money it’s really good choice and good value! It’s premium knife with premium materials. So if your budget allows – just go and grab it! It’s easily one of my most carried small EDC folders. And for sure the toughest! 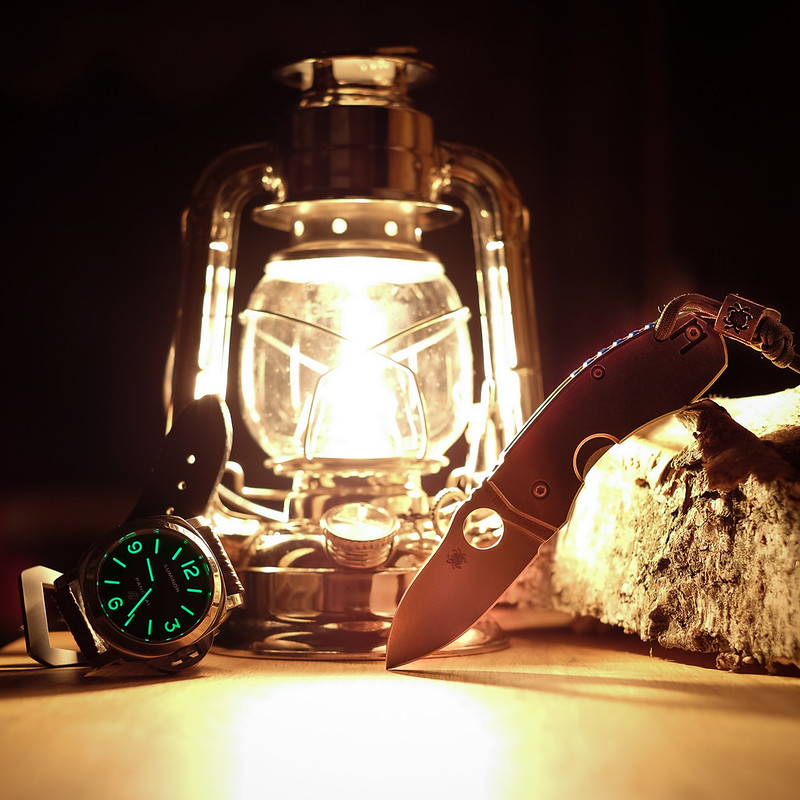 Adventurer, outdoorsman, mountaineer, sailor and gear enthusiast from Poland. It all started for Piotr when he was 10 and went to the high mountains with his father. Now he’s transferring his experiences and knowledge to the younger generation, together with his wife. His perfect vacation is not an all-inclusive hotel but a nothing-inclusive mountain shelter. More…

Orders are still being shipped. Shipping times may vary as I will visit the Post Office once a week. Dismiss