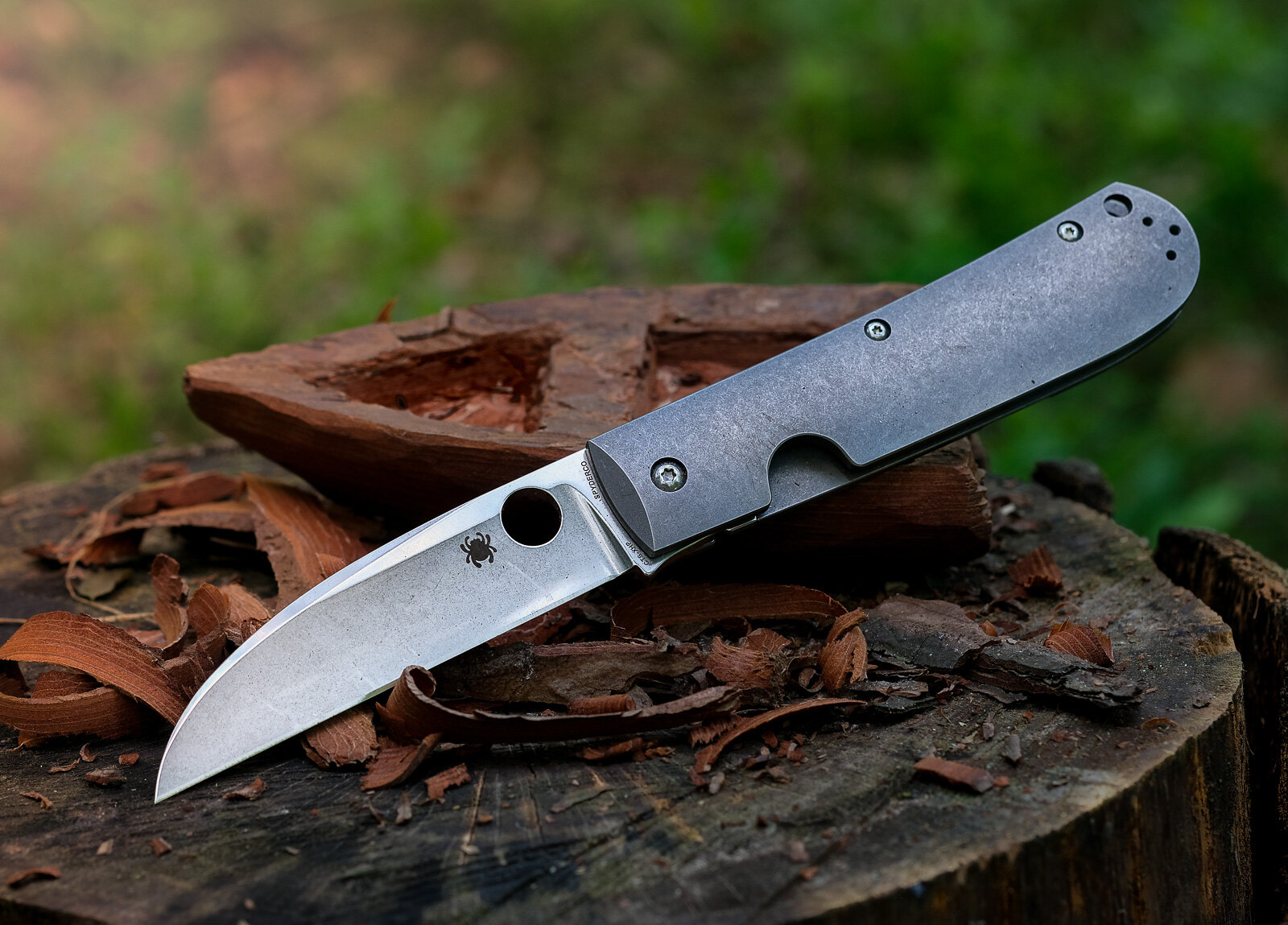 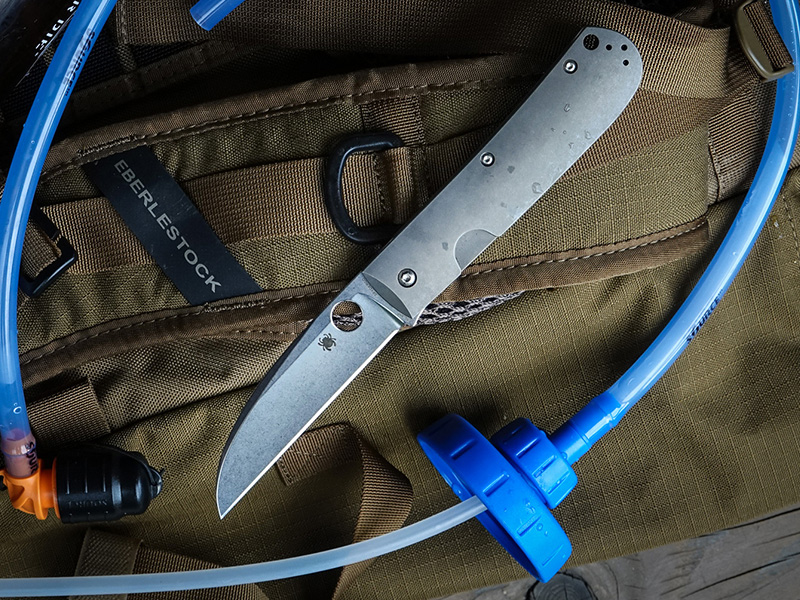 It’s not “just another” folder by Spyderco, which come and go every season. It took a really long time (and I mean years) for Spyderco and custom maker Marcin Slysz to work out all details of this knife.

I had a chance to play with a custom Swayback prototype, before it was delivered to Spyderco by Marcin at Blade Show a couple of years ago. And I can tell you, Spyderco just nailed this project!

It’s gonna be a long time classic, just like the Slysz Bowie (which actually doubled in price on second hand market just after they retired it from production). I’m really glad Spyderco didn’t rush with this project and decided to really perfect it as a number one priority. 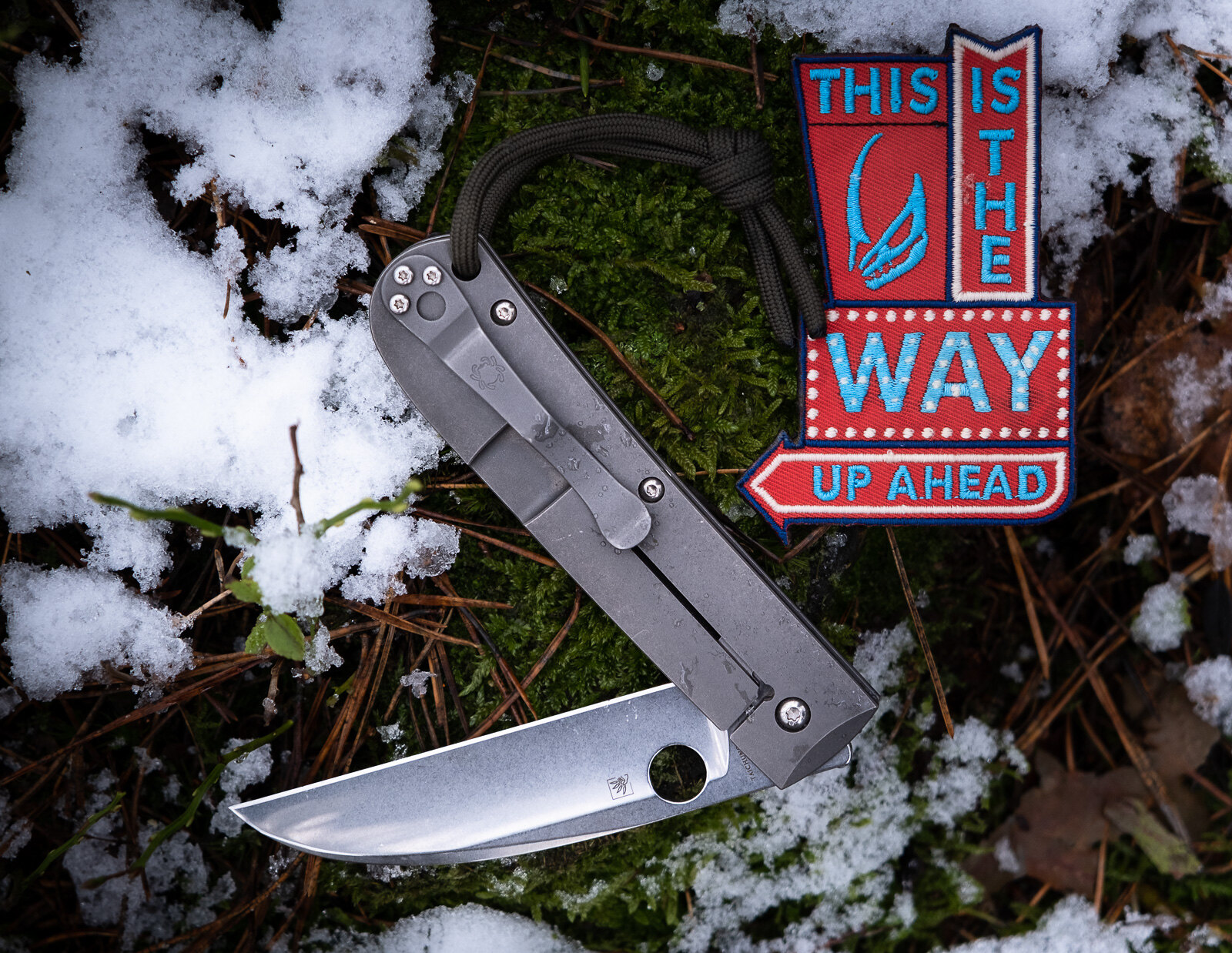 So maybe you’re wondering, what a swayback actually is? It’s the name of a classic slipjoint pattern, which has a slim warncliff blade profile and a handle, which sways to the back – hence the name. So now you have it.

Of course Spyderco’s variant is a full blown Titanium framelock folder rather than a slipjoint, which makes it stronger and safer to use vs the old-school variant.

Marcin’s design was really challenging for Spyderco in couple of aspects, one of which was the so-called ‘kick’ (or beard, depending on regional naming). It’s that bottom part of blade’s tang, which in a slipjoint works as a blade-stop on a closed knife. This feature prevents the cutting edge hitting the backspacer inside a knife. And even if it is not required in a modern framelock (technically) it just identifies a quality slipjoint swayback pattern. Additionally, it works like a hand stop on an open knife and protects your thumb when closing it. So Marcin insisted it should be there… and Spyderco delivered.

These kind of small details combined with contoured and rounded handle slabs, make this Swayback knife truly exceptional! By the way, Marcin made also a custom slipjoint variants back in the days, the one with green scales in the picture started the Swayback route for the maker. What a cool knife it was!

So yeah, it’s as close to the custom version as possible. It’s made in the Taichung factory in Taiwan, which is known as the most advanced facility of Spyderco, so the quality is really very good. Remember the Slysz Bowie? Yeah, that’s the same manufacturing site. 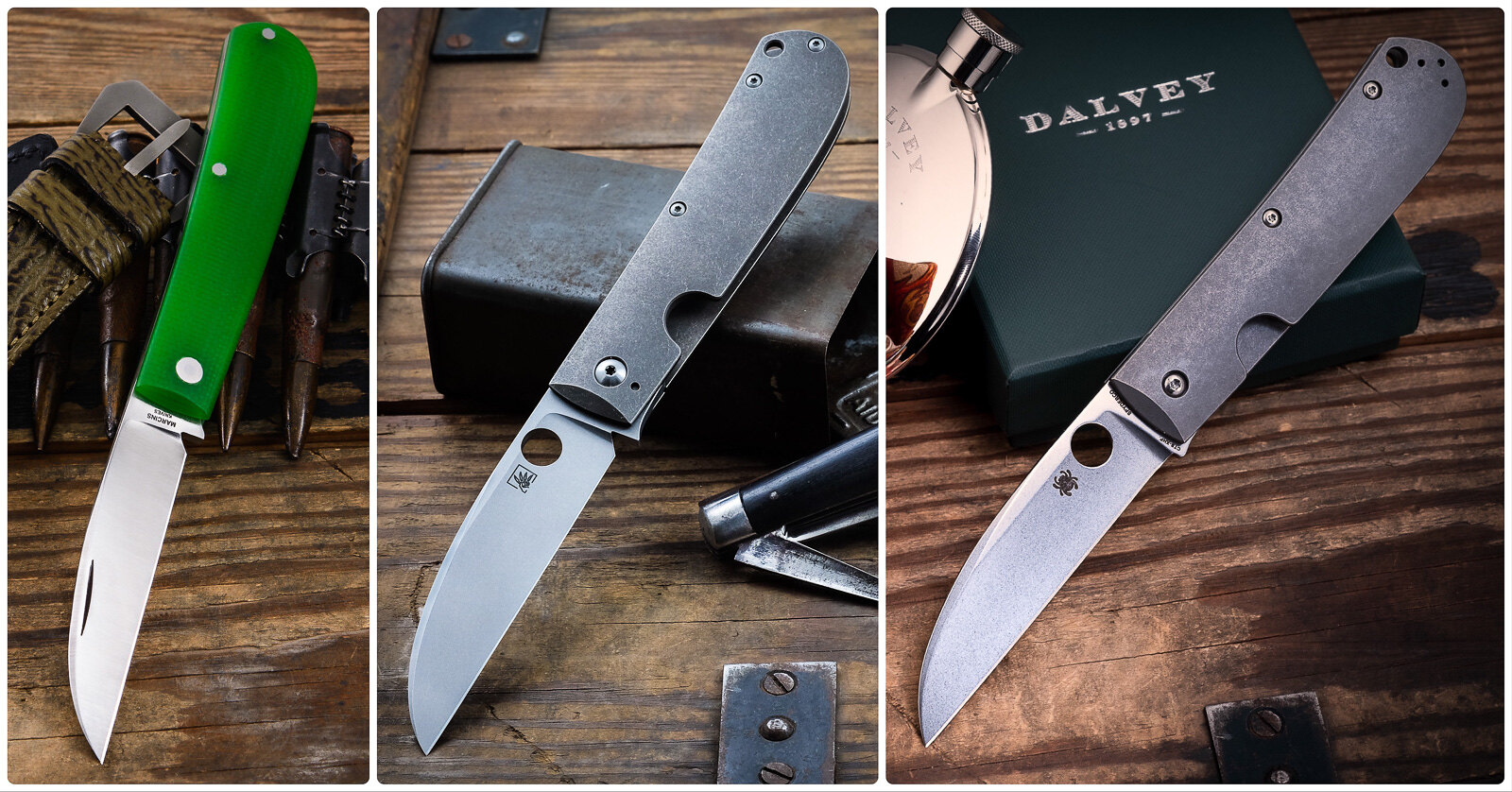 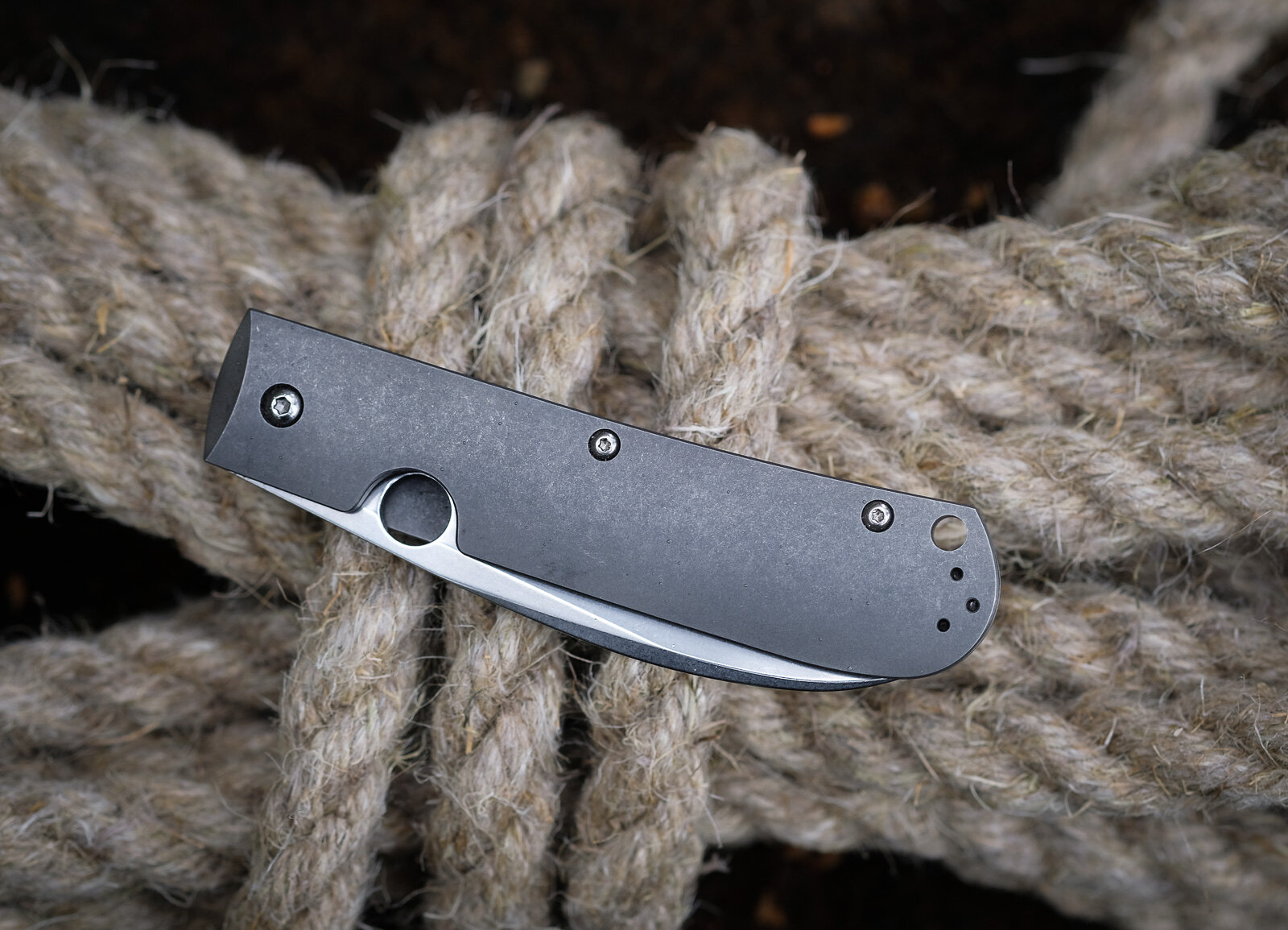 The Spyderco Swayback is a slim knife, with a downsized opening hole for real slipjoint-like aesthetics and geometry. When closed the blade is well hidden between rounded Titanium handle slabs, which makes it easily pocketable and slick looking too. Honestly, it’s one of the most handsome looking knives in a closed position.

The pocket clip is a standard Spyderco stainless one. It works just fine, but a lot of Swayback owners opt for a custom aftermarket clip, usually deep-carry ones or at least a bit more stealthy looking ones.

And I can’t blame them… I actually customized my own Swayback as well by bead-blasting an old Ti Spyderco clip (and drilling holes a bit larger for the perfect fit). So there are a lot of options available, the choice is yours.

Another option is going really old-school, so without a clip at all and just a leather slip-in pouch for pocket carry. Let me digress here – some people say that a wire-clip would work great on this knife but personally I don’t think so. First of all the blade tip goes really deep between the slabs, so there’s no space for a screw, which would go through the handle like in a Bowie or the Techno.

That’s the consequence of a warncliff blade shape. And also it’d loose all that clean look with a giant hole & screw right in the middle of the handle’s butt. So in my opinion (and your mileage may vary) Spyderco would ruin the whole concept if they’d go with a wire-clip. 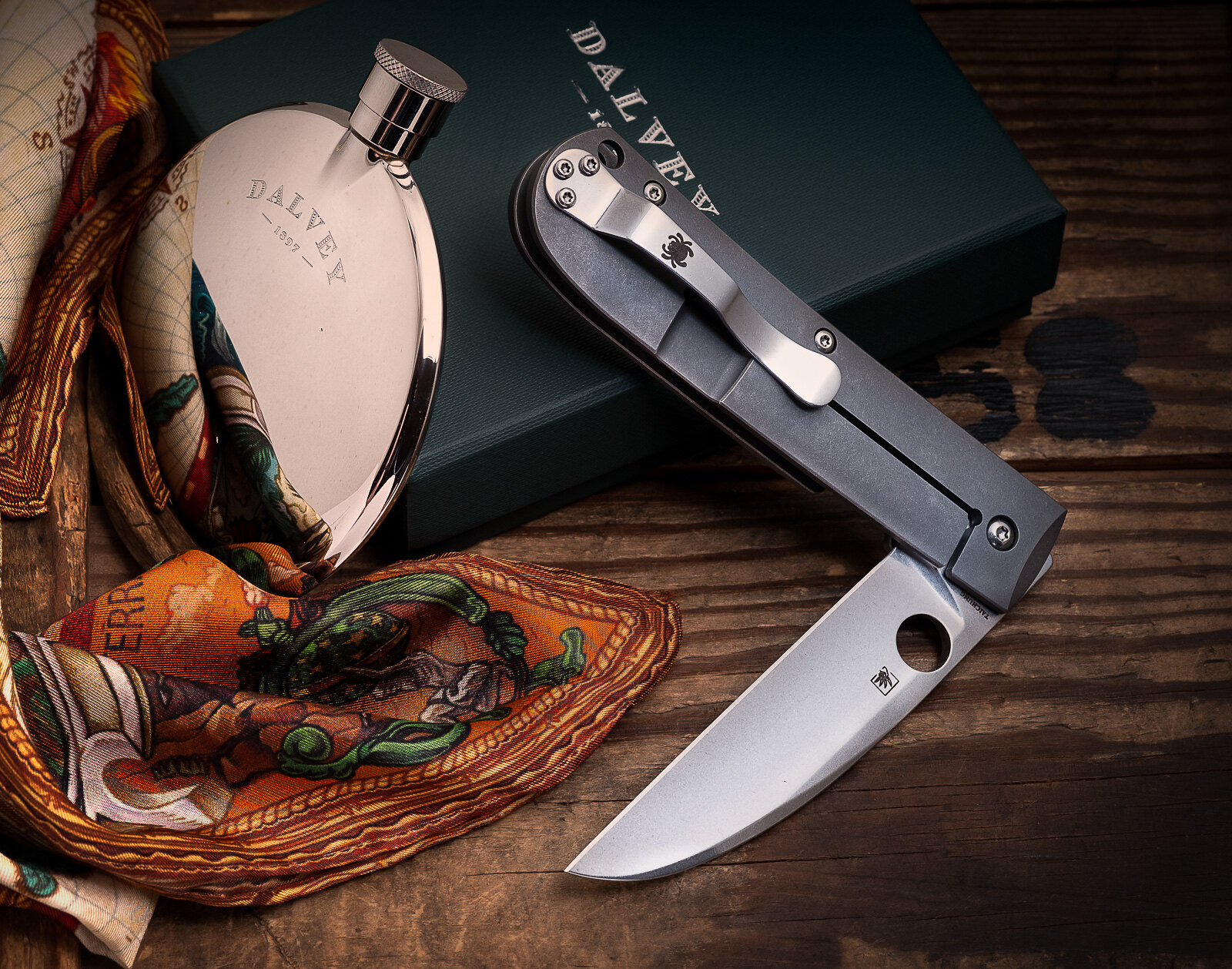 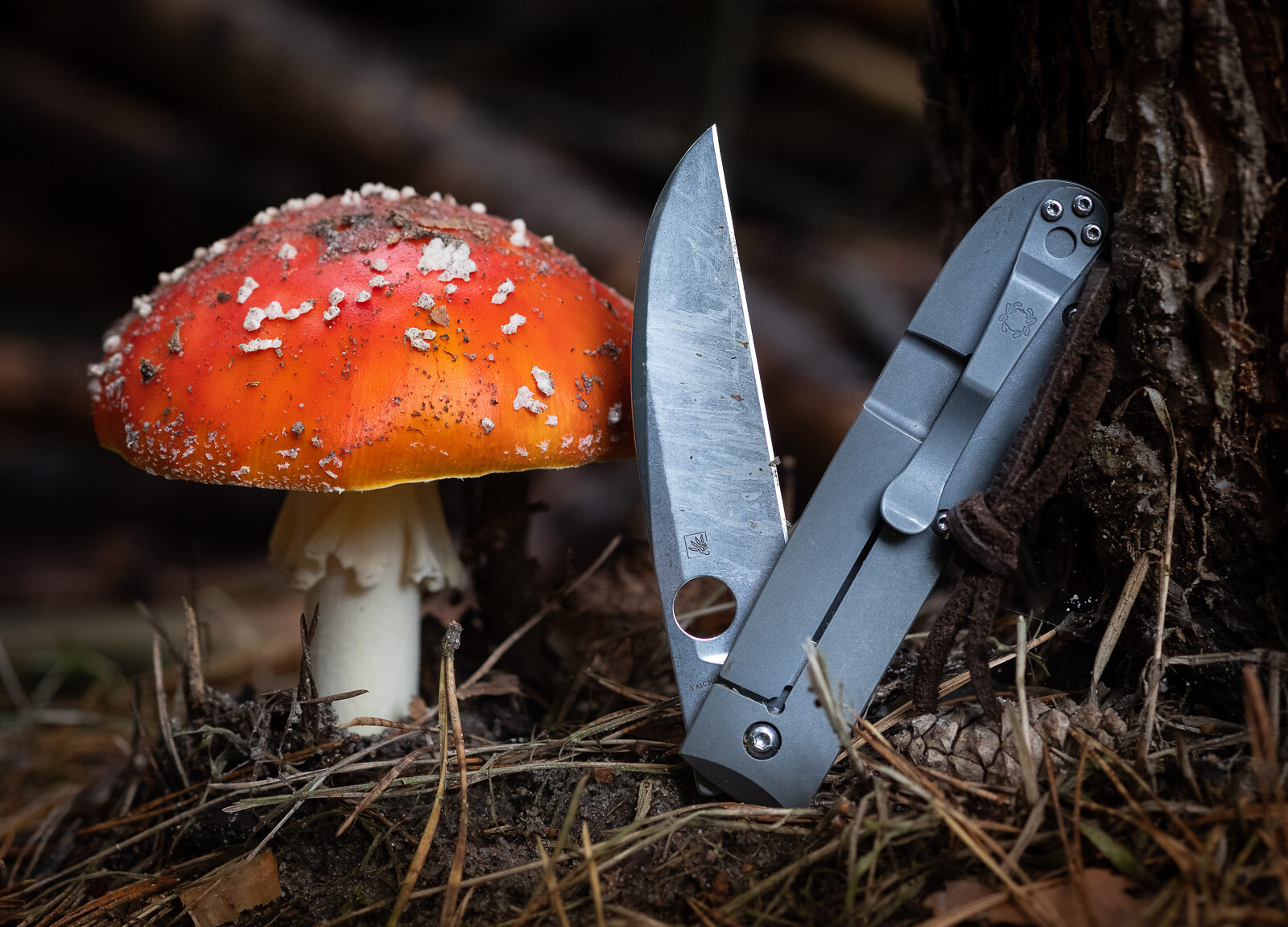 At the beginning, one-hand opening was not as easy as on classic hump-backed models, but I got used to this after just a couple of days of EDC’ing it. Also the bronze washers are smoother and smoother after an initial break-in period and the whole action becomes fluent and really smooth (kind of Chris Reeve Sebenza action feeling). Just make sure you’re not pressing against the framelock with your fingers on opening.

What about lefties? Well, it’s drilled & tapped for left pocket carry but opening with left hand is virtually impossible – keep that in mind if you’re a southpaw. But it’s still just a utility knife, so opening it slower or simply two-handed, is just fine in my book.

It’s neither a tactical knife nor a fighter, where rapid deployment is a priority (Spyderco has a Military folder for that). Swayback is a classic daily helper, so take it easy and take your time.

The locking bar is equipped with a stainless insert for longevity and it has an overtravel feature built in too. The back of a knife has an open construction with just the stand-offs for easy cleaning. Plus a lanyard hole, of course. It’s a really clean design. 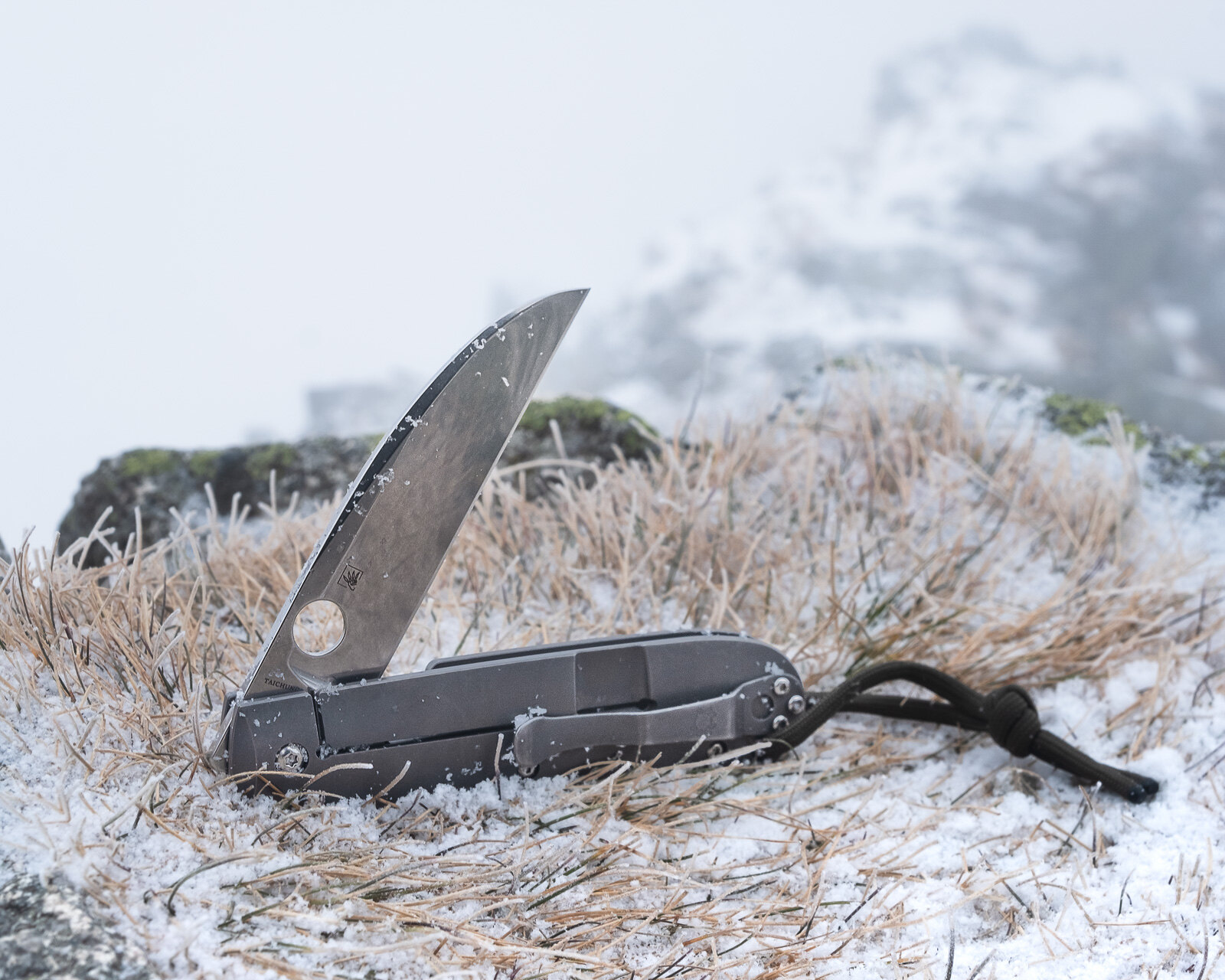 And now… THAT blade! This is what makes Swayback so awesome! A slim and pointy blade, with distinctive high hollow grind and thin cutting edge. It looks a bit like a straight razor… and it cuts just as effortlessly and effectively.

It’s an insanely sharp and pointy knife, which works wonderfully during all kinds of edc and utility tasks. Doesn’t matter if you’d be peeling an apple, making a bark boat for your kid, whittling sticks or doing precise work with that pointy tip – it just shines.

Straight lines allow for using it in almost any grip, including the chest levering or even the chest-pull technique. For a knife that is supposed to work well as a carver and whittler this is very important too.

Spyderco used CTS-XHP steel for Swayback, so it sharpens easily, takes a very good edge and keeps it for a long time. It’s a premium stainless steel and a really good choice for a high-end EDC folder. It’s not an extreme steel, but one of the most balanced steels used by Spyderco today.

And last but not least the blade finishing is a crossover between polished and stonewash, which hides the battle scars well (stonewash on the surface) and glides through whatever you cut (thanks to the pre-polishing). 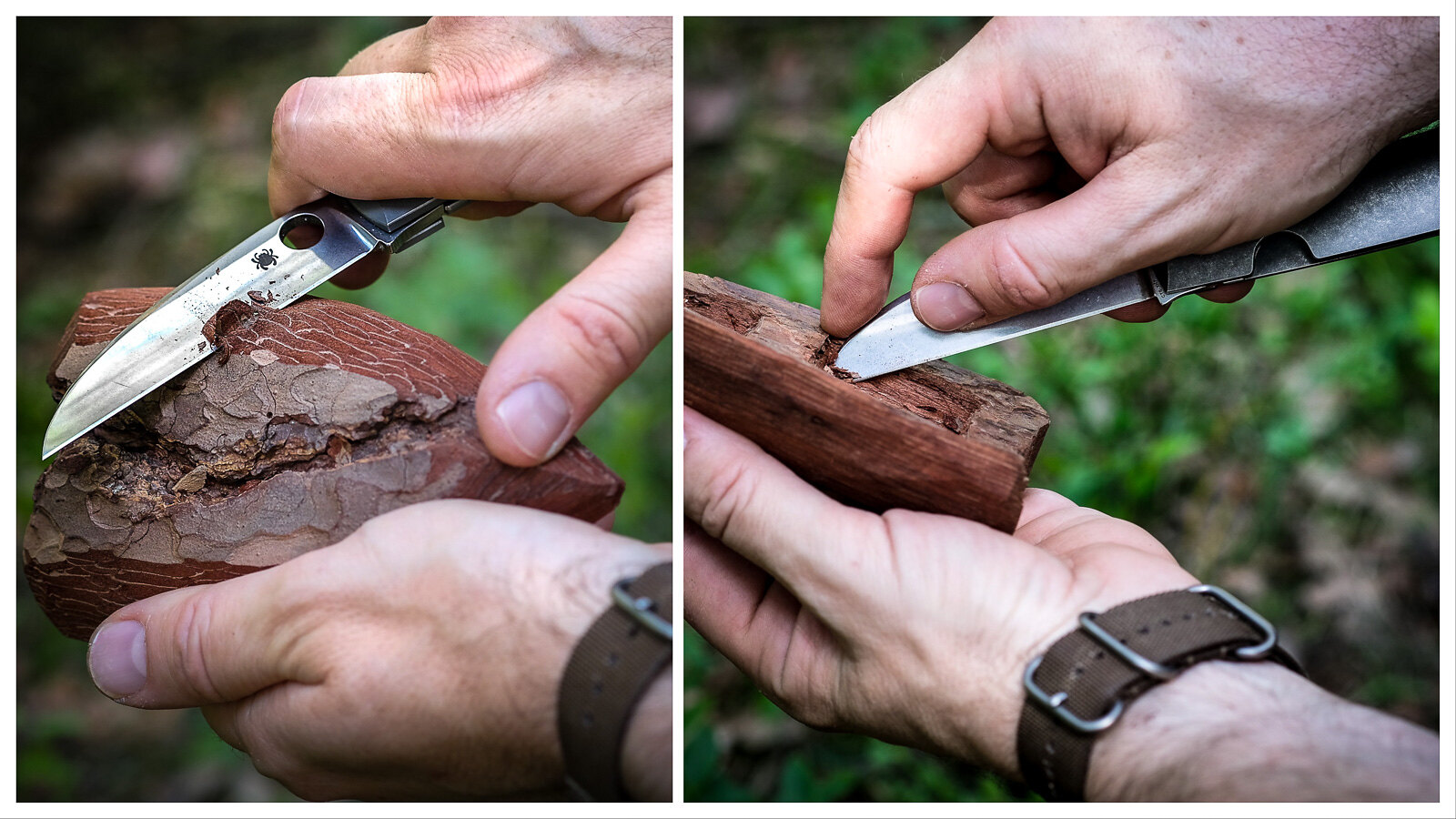 I’ve been carrying it quite frequently for a good half year (at least) before finishing this review, and you could follow that on my IG feed if you follow me (@piotr_ma).

I was not rushing, but wanted to check it out in many scenarios – vacations, home, office, weekend wilderness outings, even mountaineering in the fall and frosty winter to be sure that needle tip is not brittle in subzero temperatures. And I can tell it with full confidence: Spyderco Swayback delivers really strong performance.

It cuts exceptionally well, it’s great for whittling, carving, rope cutting, and for precise cuts in any wood. This style of a blade is also perfectly suited for cutting flat materials (like leather, plastic, paper etc.) on a cutting bench. I can imagine it’d be a handy EDC tool for a leather crafter, sample cutter, even for gardening etc. It’s one of the most utilitarian Spyderco knives. And despite the lightweight look it’s still a full size folder with a blade of 3.53 inches. 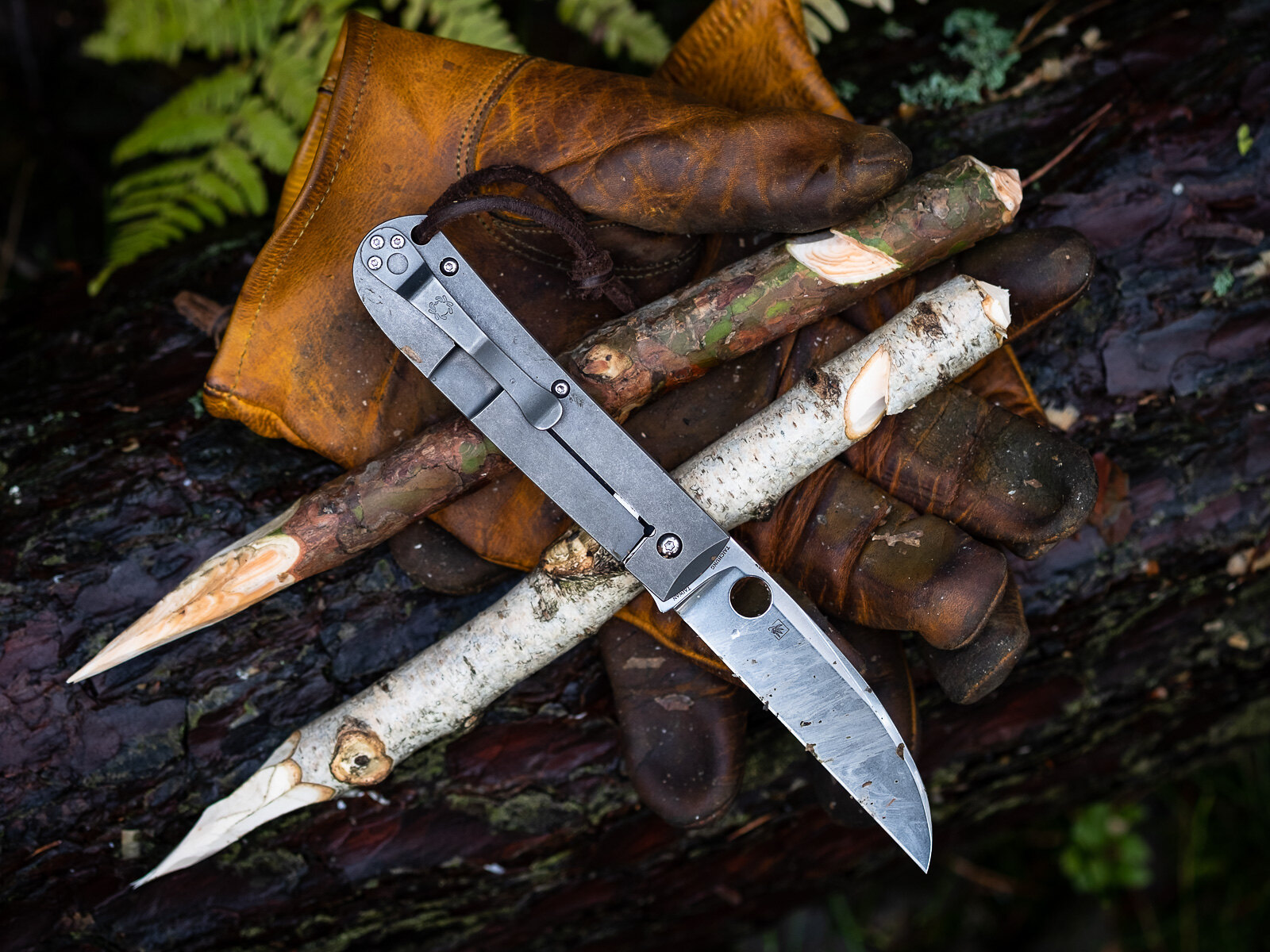 I admit it, the Swayback is not an ideal knife for some bushcraft related duties due to the straight edge, but still I tried it as a feather-sticking tool and it did just fine. Making tarp pegs? Sure, no problem. However, that long curvy spine is not 90-deg sharpened though, so you should either use the back of your Victorinox saw blade or bring a dedicated striker if you’d like to start a fire with your ferrocerium rod. 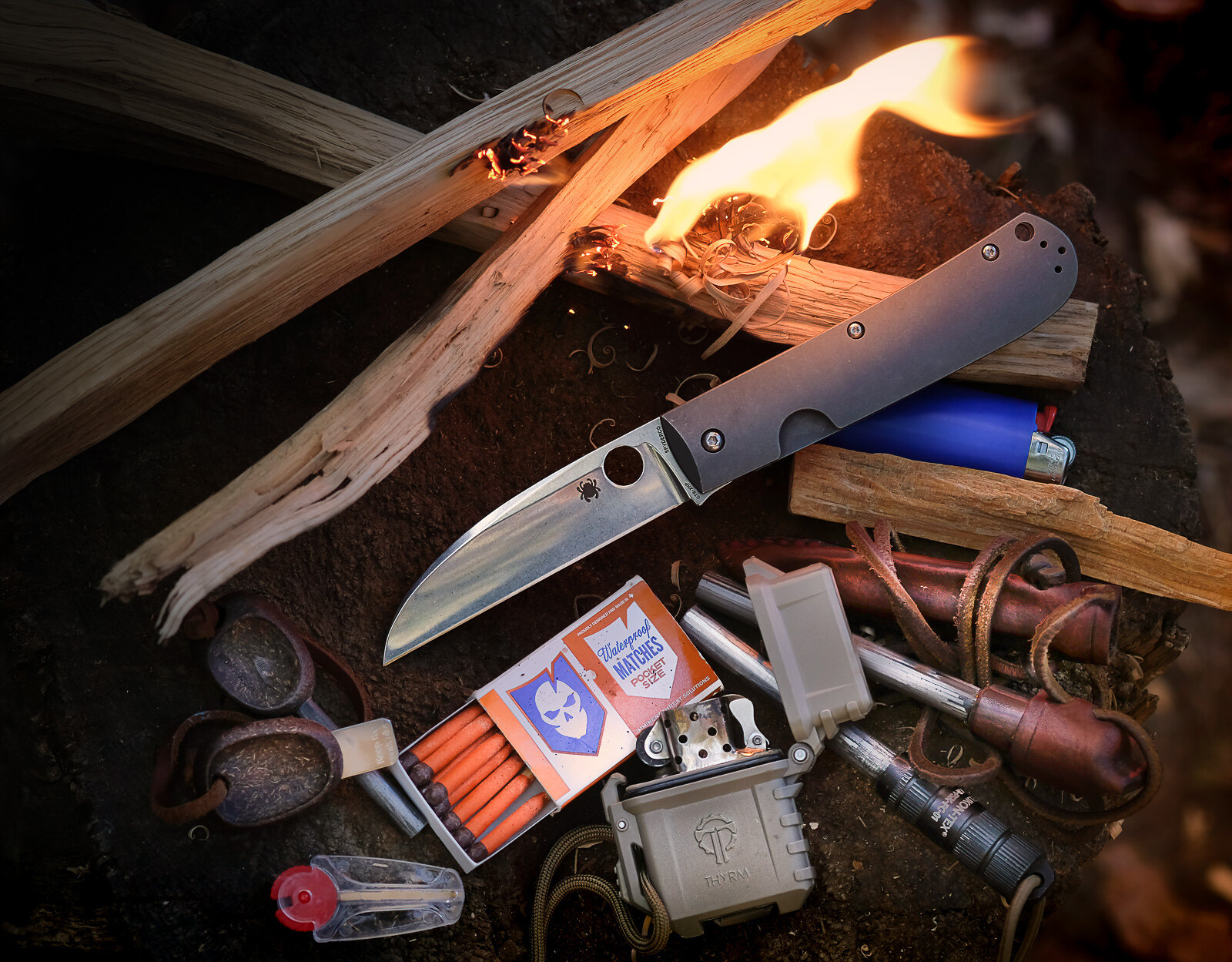 So while it works fine for basic camp and bushcraft woodworking projects, it’s surely not intended for skinning, scraping and other jobs, which require at least some belly on the cutting edge. But combine it with a Kephart style knife (or similar sized classic fixed blade) and you’ve got a match made in heaven! Also add a small axe to this equation and you’re set for anything in the wilderness. 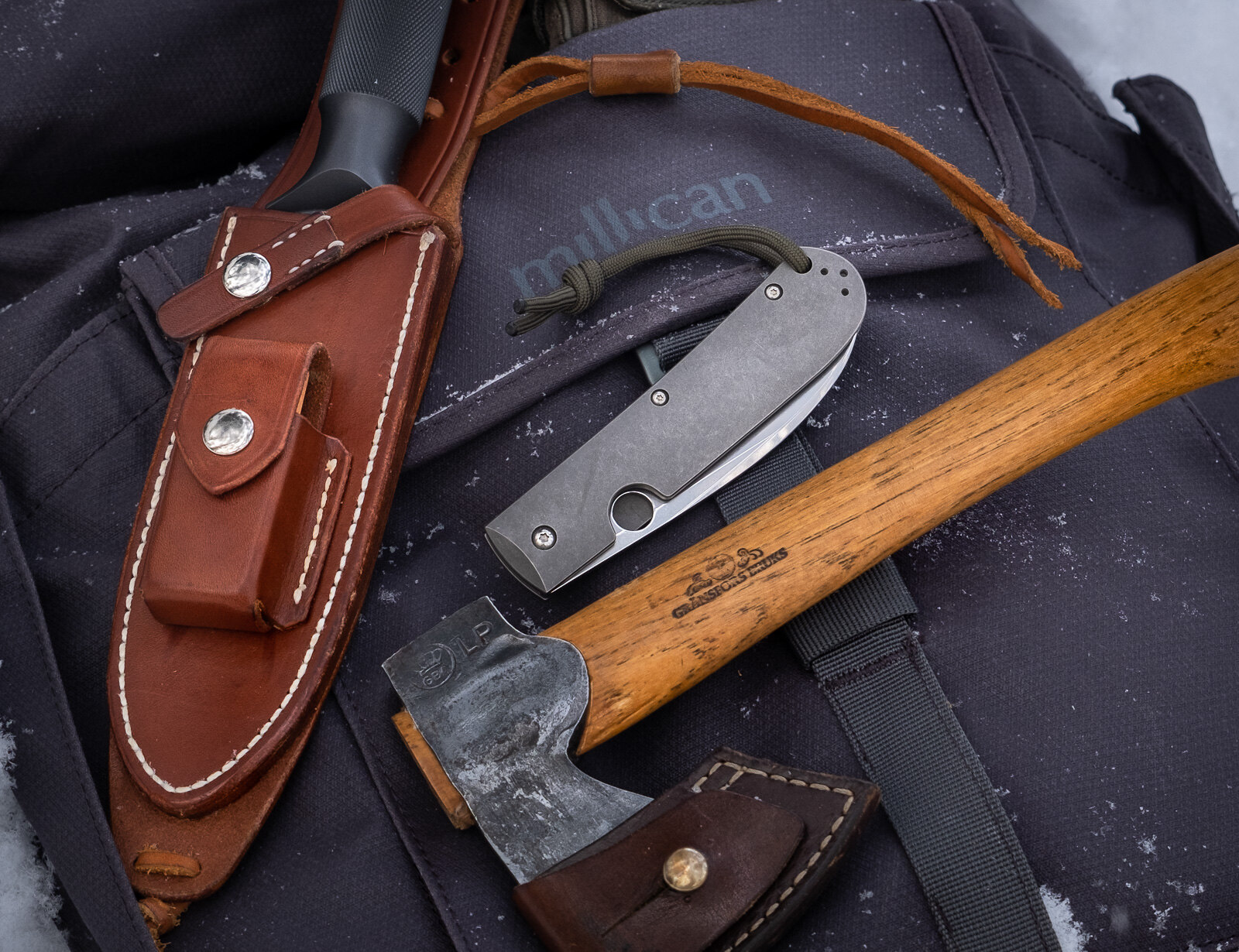 The classic swayback pattern has been around for more than two centuries so far (and counting), and won’t get out of style anytime soon, that’s for sure.

All in all I’m so glad Marcin Slysz and Spyderco teamed up again – they made a knife, which could be your classic (and classy) everyday companion for most non-tactical applications. Clean look, premium materials, cutting performance – all you need in a good EDC folder.

Despite a serious size the Swayback’s overall look is non-threatening and more likely to be a good conversation starter than something that would scare people off. For urban and office use it’s a really serious asset. And last but not least I’m personally quite sure it can be a good investment too, like the Slysz Bowie was. 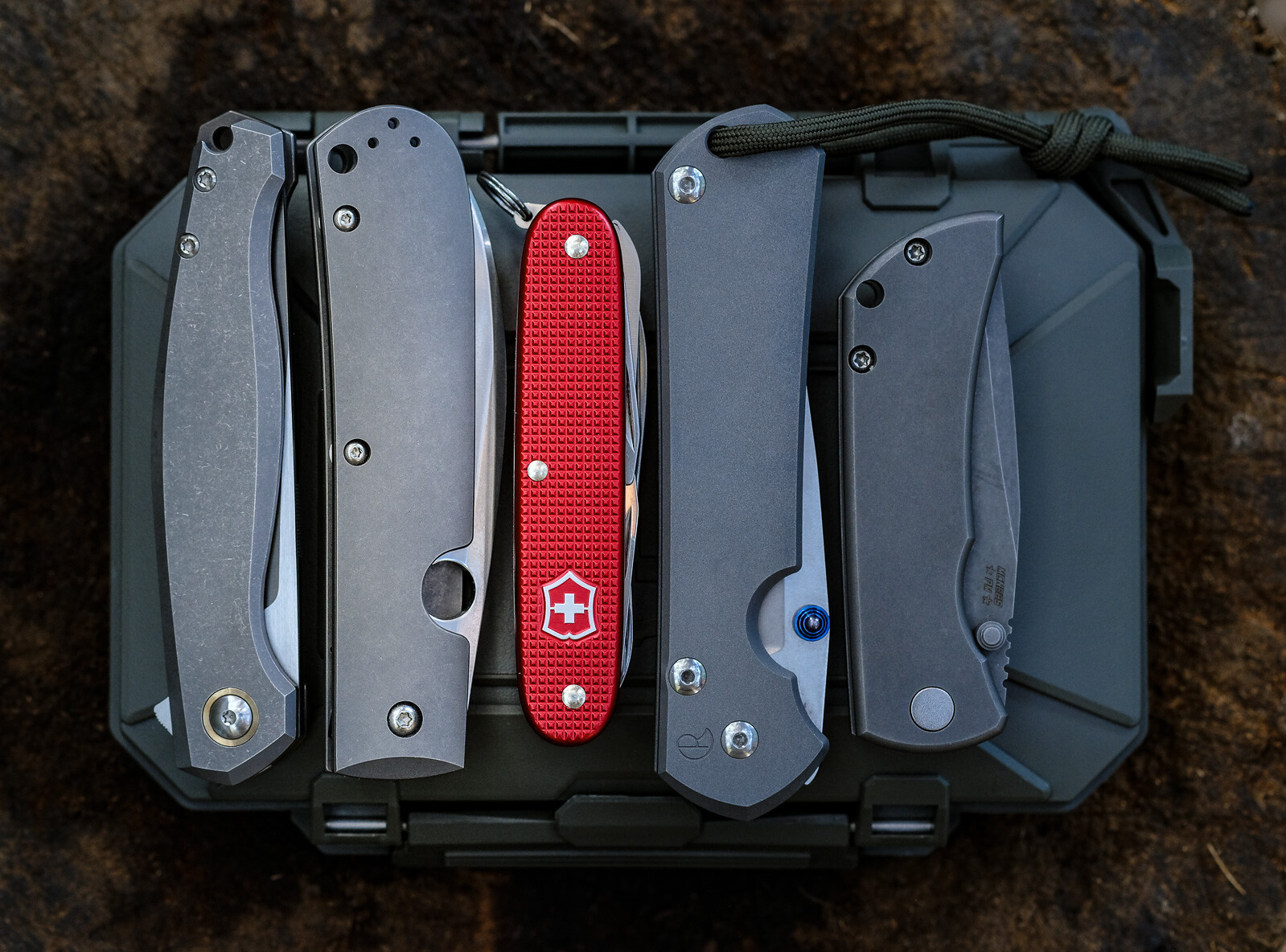