The Owner and Founder of Krupto Strategic, a lifestyle brand that pays tribute to the sniper community, shares his operational carry.

1. What is your current go-to pack?

My packs are always changing, depending on what I find myself doing. But at the moment my load out requires some discretion and a minimalist approach. So I’m using the Griffon Industries Shield pack due to its sleek design and “normal” appearance. Any form of MOLLE, Velcro, or patch panels would instantly stand out and would draw unnecessary attention. This is my SERE (Search, Evade, Resist, Escape) bag, so everything inside is meant to allow me the greatest opportunity to get back to a safe location. I’m not really keen on ending up on Al-Jazeera TV. Orange isn’t my color anyways. 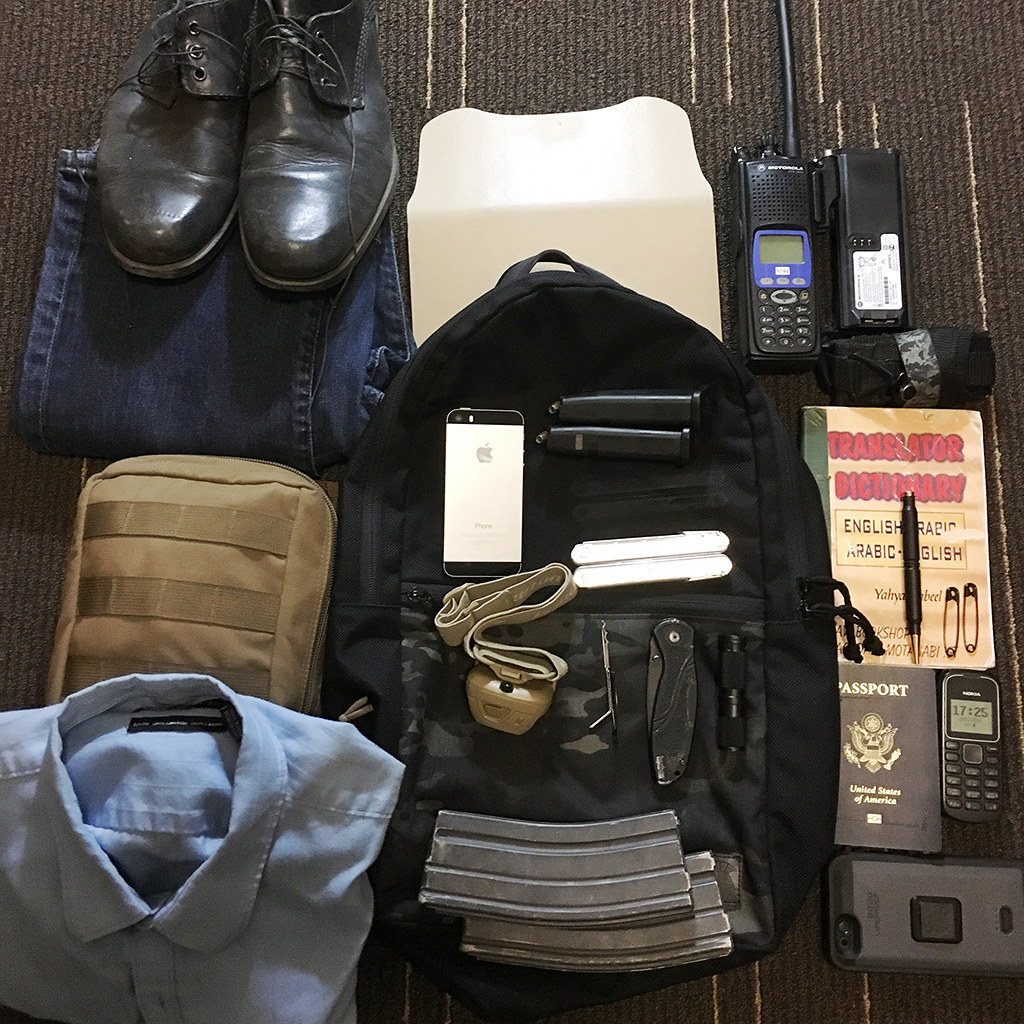 2. What items can always be found in your pack?

I kinda have a unique job, so my loadout is tailored to the main purpose for the pack. For this loadout in particular, I always carry a Maratac AA flashlight, spare magazines for my AR and Glock, Passport, Bogota lock picks, Arabic translator book, SOF-T tourniquet, a burner cell phone with local SIM chip, Leatherman multi-tool, trauma kit, Princeton-Tec headlamp, and some form of negotiating material in order to bribe someone. Most times, money is always the best bribery material to get somewhere or get past a security checkpoint. In my case, I’m trying not to stand out as an American, so I have a cleared iPhone 5s since people in the Middle East LOVE their electronics. 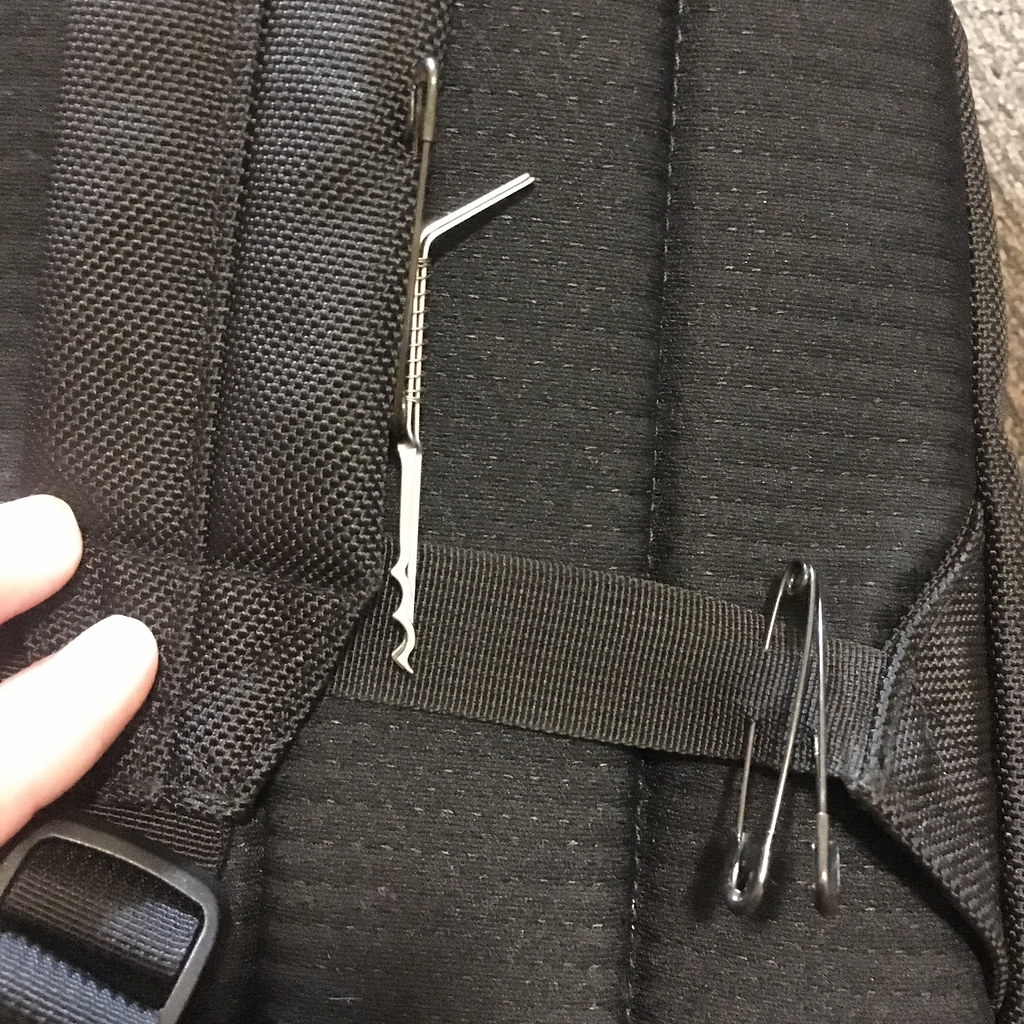 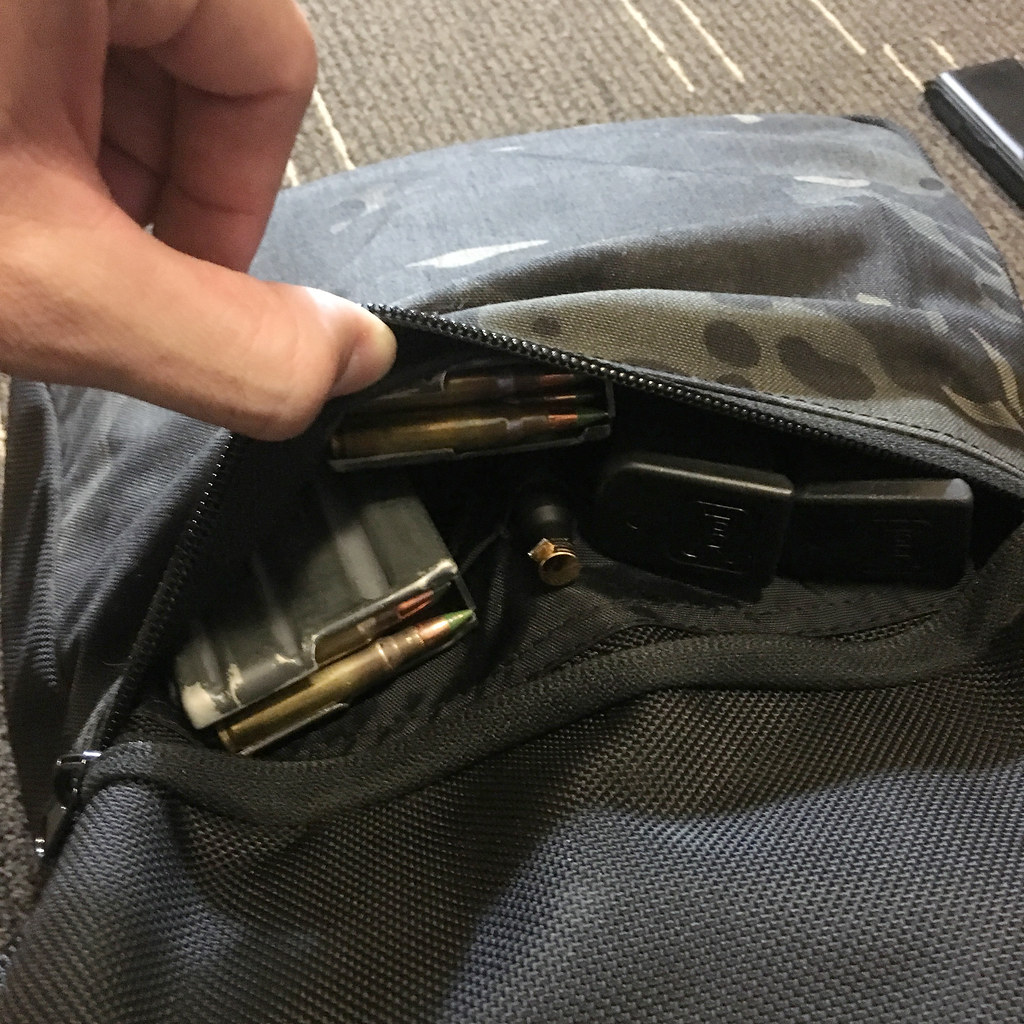 I also put a 7.62 rated armor plate in the laptop pocket of the pack in the event I’m being pursued by someone that intends to cause harm. AK-47’s are the most prevalent where I’m at so it only made sense to get rid of the usual soft armor I have in there and replace it with the plate.

To finish out my loadout, I carry a set of clothes that are commonly seen around my current area of operations. I usually wear Arc’Teryx pants, Salomon boots and some form of button up shirt. Those clothes can’t be found where I’m at, so they would immediately cause me to stand out. I threw a ratty pair of leather shoes, a pair of plain denim jeans and a plain blue button up in the bag so as soon as possible, I could change into the clothes and start working my way back to a friendly part of town. 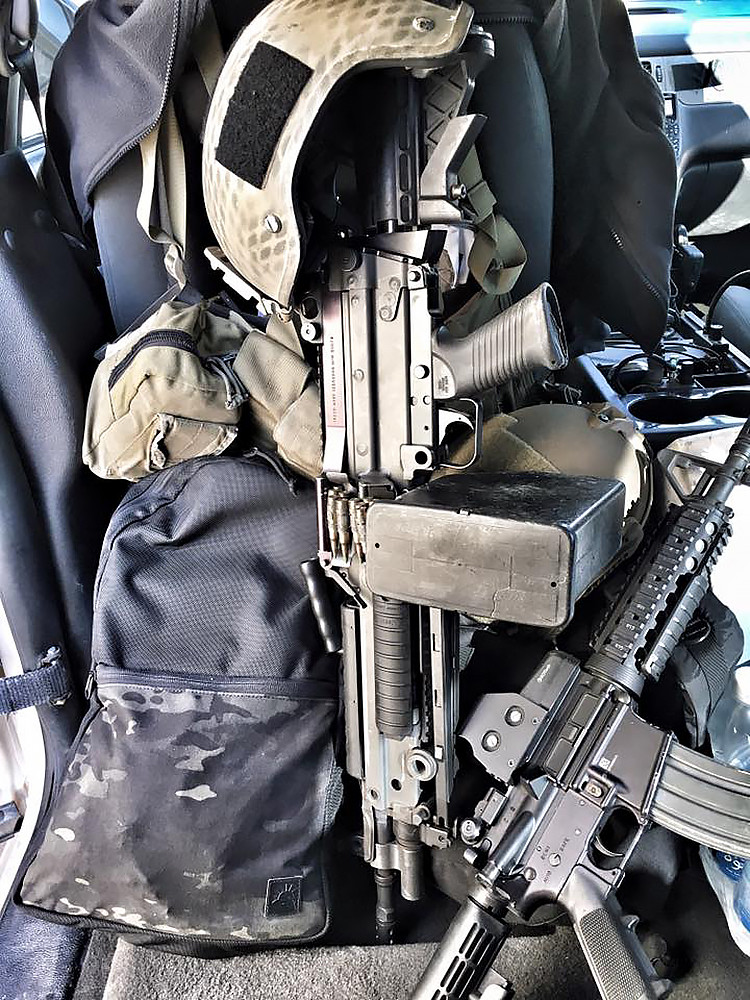 3. Can you tell us a little about what you do?

For operational security reasons, I can’t really divulge what I do for my main source of income, but this past year I started my own company called Krupto (Kr-ew-pto) Strategic. Krupto is Greek, meaning to hide, conceal and escape notice. Krupto focuses on two things. Gear tailored to the precision rifle shooter, and a high end clothing line. I grew weary of the typical clothes we see within the firearms industry. The Molon Labe, Sheepdog, 3 percenter stuff you see everywhere. I wanted to make a lifestyle brand that didn’t advertise my customers capabilities or their background, yet provided them the functions and capabilities to operate in austere environments. I was incredibly fortunate to work for Patrick Ma (founder of Triple Aught Design and Prometheus Design Werx) so he was my mentor from the very beginning and he has taught me the immense process needed to make high end, hand crafted apparel. My sniper/recon background showed me many flaws and gaps in the equipment market for precision rifle shooters so I wanted to make tactical gear tailored to them and their needs. It’s kind of an all encompassing company that is just in its infancy, but has been very successful thus far. 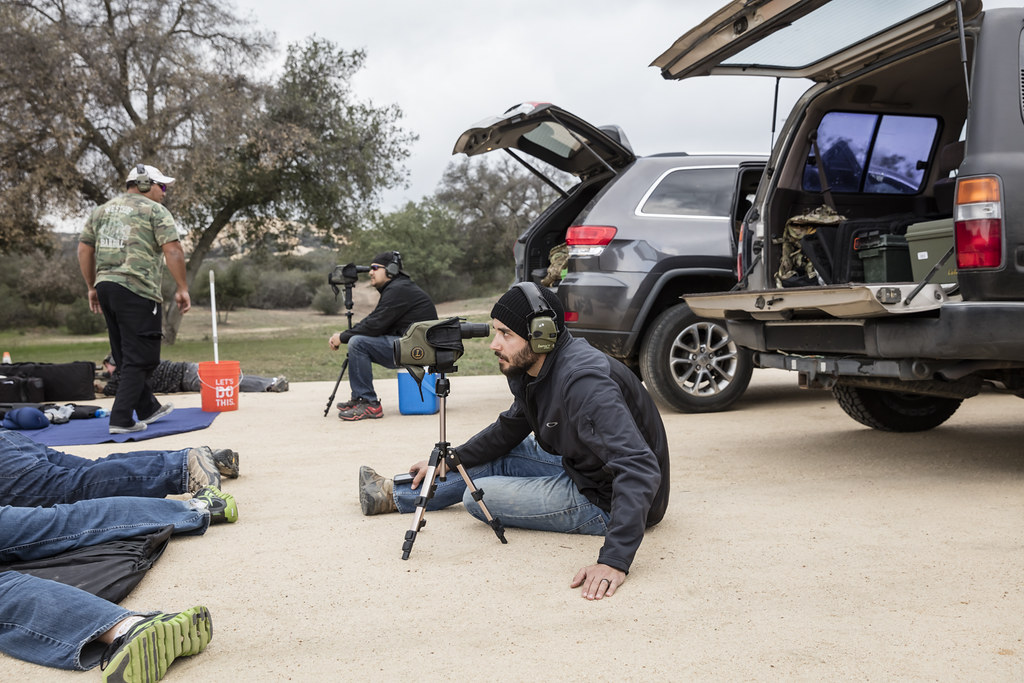 4. What is the passion that drives the brand?

I love the firearms and tactical industry, but I don’t dress the part when I’m home in San Diego. I’m very passionate about pushing the envelope and allowing men to be more capable to survive and thrive. I carry lock picks, a concealed pistol, a pocket knife and various other EDC items but I don’t want anyone else to know that. If I see someone walking around with a 3 percenter shirt on with a MultiCam hat and their favorite patch on it, I instantly tag them as a person with a (possibly) higher level of skill then the regular civilian. I like the “grey” man; the person that blends in, dresses like everyone else in their environment and is un-assuming. It’s that grey man that is my targeted customer base. In this world of ours, terrorism is a huge worry. If I were intent on causing harm to a packed restaurant, and I walk in and see the crowd, I’m targeting the guy wearing multicam, a molon labe shirt and the biggest dudes that pose a threat. It just doesn’t make sense to me to be that #1 target. I want to create an industry counter-culture with my clothes. Think Huckberry, meets PDW, and ITS Tactical. I have a huge respect for all of those brands, I’m just trying to make my own, in my own way. My precision rifle gear isn’t meant to re-invent the wheel, I just want to make it better, or fill the gaps. There are so many great companies making great gear ever since the rise of the Precision Rifle Series, but not too many of them have had to sit in a hide site for days on end or hike 12 clicks through the Afghan mountains with it. I’ll only make what I was willing to use when my life depended on it.

5. How would you describe your level of pack organisation? (Chaotic, Casual, Pack Jedi, Scientific)*

I could probably be considered a Pack Jedi by most but personally I lean towards Casual. I have a few items that never leave the bag, but for the most part it’s super flexible. The only exception is if I am going on a multi-day hike or an extended camping/road trip. In that case I’m VERY deliberate with what I bring, where it’s stored and how it’s packed. Most people have a yard sale in the back of their car during a road trip, but I’ve seen cases where the worst happens and a properly packed car/bag would have saved a life.

Editor: I was excited to hear about what Nick was doing with Krupto Strategic and I genuinely expect some really exciting and fresh gear to come out of it, as well as a avid following. Check out the website here and make sure you’re following them to keep up to date on future releases! 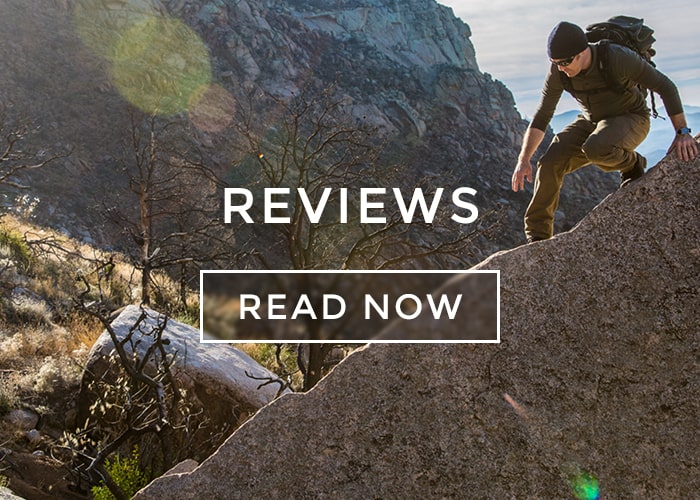 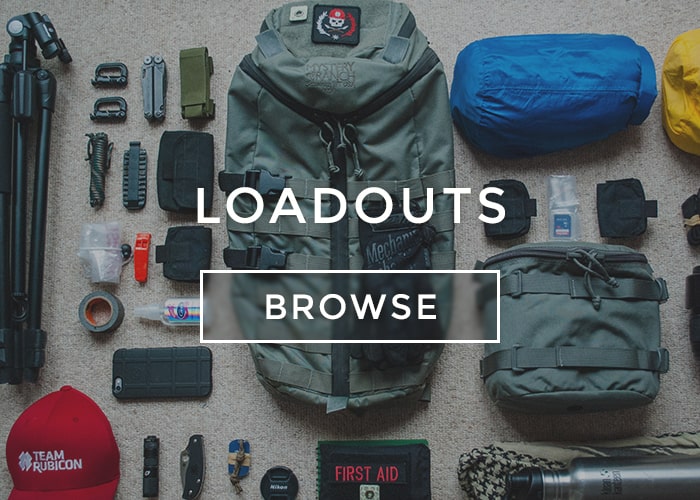 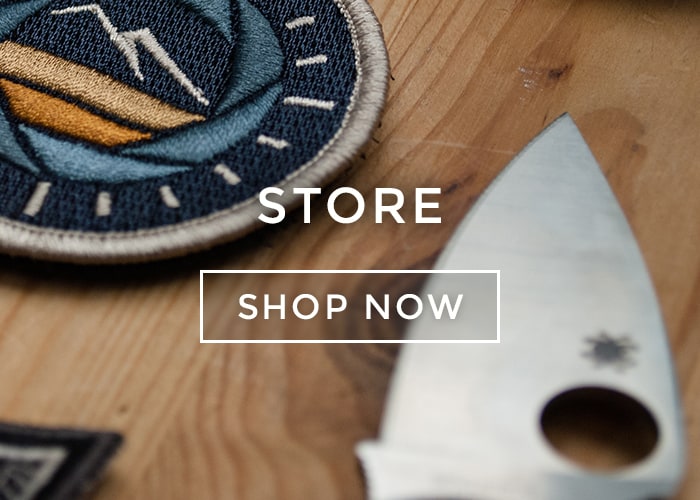 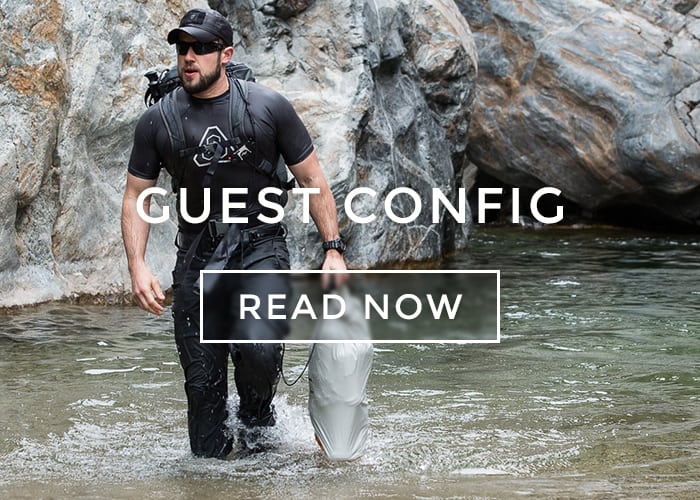